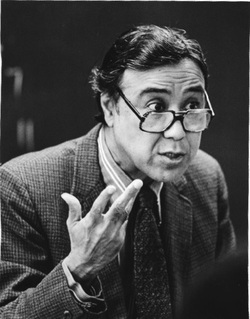 Roberto G. Sánchez, age 93, formerly of Madison, WI, died in Santa Barbara, CA, on August 15, 2016. He was born in San Antonio, Texas, on Sept. 24, 1922, the only child of parents who emigrated to the US from Mexico. He graduated from Corpus Christi High School in 1940. A first-generation college student, he then enrolled in Corpus Christi Junior College before transferring to the Univ. of Texas to finish his BA in 1943. He earned his MA from that same university in 1944 before coming to the UW-Madison for doctoral studies. He defended his dissertation in the Spanish Department on The Theatre of Federico García Lorca, under the direction of Prof. E. R. Mulvihill, in 1949.  Upon completion of the Ph.D., Prof. Sánchez was awarded the UW post-doctoral Markham Fellowship, which allowed him to pursue research in Spain from 1949-50. He then joined the UW-Madison faculty as an Assistant Professor in 1950, was awarded tenure in 1955, and promoted to the rank of Full Professor in 1963. His professional achievements include two scholarly books, as well as numerous articles on Spanish literature, and four extremely successful co-edited classroom editions of Spanish literary texts. He was also elected to the Academia Norteamericana de la Lengua Española. Among his many contributions to the UW-Madison was his work on the University Task Force on Minority Student Retention. As a faculty member of the Spanish Department, Prof. Sánchez directed and produced some 35 plays, which were attended by high-school Spanish classes from around the region as well as by UW-Madison faculty and students. He was recognized for his excellence in teaching with the UW Emil H. Steiger Teaching Award in 1979, and was responsible for training generations of teaching assistants who learned their craft under his tutelage. Prof. Sánchez retired from the UW-Madison in 1984 and later moved to Santa Barbara, CA, in 2002.
​
Even in retirement Professor Sánchez’s passion for education and helping others continued through his volunteer work in the Madison public schools and St. Mary’s Hospital, and, most importantly, through his legacy of philanthropy supporting Hispanic students in public education. He created scholarship programs at the Del Mar College in Corpus Christi, TX, and in the Madison Metropolitan School District, Madison College, and UW-Madison, to promote academic excellence and honor his family’s Hispanic heritage. To date, nearly 90 students have benefited from his generous support: six from UW-Madison, 21 from Madison College, and 60 from Madison high schools.
Roberto Sánchez enjoyed travel, tennis, his dachshunds Quico and Paco, reading, plays and, most of all, people, and helping those around him. He will be remembered fondly by all who knew him, and his legacy of giving will benefit public education, both at the secondary and college/university level, long into the future. He will be sorely missed and fondly remembered.
Donations are welcomed to the Sánchez Scholars funds at the Madison Community Foundation (high school students), Madison College Foundation, and UW-Madison Foundation.