Centro in the news

Madison-area Latino community health needs, strengths outlined in new report
While 75% of Latinos are employed, a key challenge is that more than 40% hold poverty-wage jobs and half of those have no health benefits, the report said. Additional challenges are a lack of adequate transportation, affordable childcare and access to primary care.
-State Journal, April 24, 2019

The ultimate guide to Madison farmers'  markets
One spot Sarakinos suggests visiting is the Mercadito del Centro, a Wednesday afternoon market at Centro Hispano of Dane County. Mercadito is modeled after markets you’d find in Latin America. Sarakinos says Mercadito introduces the Madison community to Latino farmers and  types of vegetables they might not find elsewhere.
- Madison Magazine, April 23, 2019

Latinos in Finance: Developing a pipeline of Latinx leaders in banking
As a bilingual Latina in banking services, Maria helps to increase access to financial services for Latinos who are underbanked, thanks to the training she received as part of the UnidosUS Latinos in Finance Initiative.
-Unidos US, April 22, 2019

Centro Hispano Continues Its Long-Standing Tradition on El Día de Reyes
​El Día de Los Tres Reyes Magos (Three Kings’ Day) represents the height of the Christmas season for many people who originate from Latin American countries and is the day that we remember how the wise men brought their gifts of gold, frankincense, and myrrh to Jesus. Centro Hispano of Dane County traditionally hosts its annual Tres Reyes Magos celebration on a Friday, however, this year Centro has moved the annual event to a Saturday.​..
-Madison365, January 9, 2019

For Centro Hispano, the theme for 2019 is hope
​The theme for Centro Hispano of Dane County in 2018 was action, said executive director Karen Menendez Coller. Some of that action was planned and proactive, like expanding Centro’s services, but other moves were reacting to crises, like jumping into action when Immigration and Customs Enforcement (ICE) came to town in September...
-The Cap Times, December 27, 2018

La Movida Honors Community Leaders at Annual Hispanic Heritage Luncheon Celebration
​Dr. Patricia Téllez-Girón, associate professor for the University of Wisconsin & Family Medicine Department and chair of the Latino Health Council, has won many awards for her amazing work she’s done in the Madison community. But she was particularly excited about winning the Community Leader of the Year Award at the 8th Annual Hispanic Heritage Luncheon Celebration at the Monona Terrace and Community and Convention Center on Oct. 12...
-Madison 365, October 15, 2018

Federal Agents Arrest 30 State Immigrants
​Federal Immigration, Customs and Enforcement officers took Wisconsin by surprise over the weekend with a series of targeted arrests. Between Friday and Sunday, ICE agents arrested nearly 30 people: 11 in Madison and 18 elsewhere across the state, including two in Milwaukee, two in Green Bay, and five in Wausau...

ICE arrests take Madison officials by surprise
Madison officials believe six people were taken into custody Friday by Immigration and Customs Enforcement in a targeted effort in the city. The arrests came as a surprise to city and police officials and few details are known about the situation...
​
- The Cap Times, September 21, 2018

The Latino Consortium for Action United We Stand! Part 1
​Back in the 1980's when it was first founded, Centro Hispano was pretty much the only non-profit, social-service agency in town except for Centro Guadalupe run by the Catholic Church on Beld Street. And Centro Hispano's executive director was pretty much the only Latino leader in many community spheres, although there were Latinos who help positions of some authority at high education institutions in Madison...
- The Capital City Hues, September 17, 2018

Biking Becomes More Accessible on Madison’s South Side
​Speaking from the experience of biking hundreds of times from Madison’s east side to Centro Hispano, Urban League, Omega School, Penn Park, Genesis Center, Fountain of Life Church, Boys and Girls Club and other places on Madison’s south side, it’s not an exaggeration that you take your life in your hands every time you make your way around not particularly bike-friendly Park Street and Badger Road...
- Madison 365, September 14, 2018

Proyecto Voluntario Martes at Centro Hispano Gearing up for Learning
​Back in 2006, United Way of Dane County worked with Latino leaders in the Madison area to produce Cuéntame Más, the first comprehensive report on the needs of the Latino Community in Dane County. The committee that puts out the report was co-haired by Fabiola Hamdan and Salvador Carranza...

Advocates speak out for undocumented Janesville resident with pending visa application
Maria Portugal is an undocumented immigrant. Three years ago, she applied for a special visa reserved for victims of violent crime. Her application is pending. She's lived in Wisconsin for over 20 years. Three of her five kids were born in the U.S...
- The Cap Times, July 25, 2018 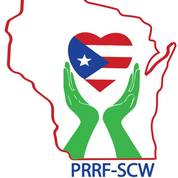 ​Puerto Rico Relief Fund Event Night
​The Puerto Rico Relief Fund of South Central Wisconsin invites you to this special event on Friday, July 27, 5:30 p.m. at Centro Hispano of Dane County. Don’t miss this opportunity to learn more about the community projects funded and to learn how to continue to make connections and how to continue to be part of the rebuilding of the island to support the Puerto Rican people...

Central Park Sessions Announces Season 5 Line-Ups
​The line-ups for season five of The Central Park Sessions was announced today and it will feature talented musicians and diverse music from all over the world. The music will take place at McPike Park (formerly Central Park) on Wednesdays and Thursdays at the beginning of August...
-Madison 365, July 11, 2018

Karen Menendez Coller: On this day of action, take action!
​Dear Editor: The current national climate targeting immigrants and refugees is completely unacceptable. Families belong together, growing and thriving, no matter their background or immigration status. Opting to leave your home country is no easy decision. It is often the only one left to escape violence and turmoil. The chance to seek refuge is not a crime — it is the foundation of this country and of the American Dream.​..
-The Cap Times, June 30, 2018

Protesters call for immigration reform in Madison
​Marchers gathered across America Saturday protesting children being separated from their parents at the U.S.-Mexico border. In Wisconsin, the Families Belong Together protests in Madison, Stevens Point, Oshkosh, Eau Claire, La Crosse and Milwaukee were expected to draw thousands of people...
-NBC15, June 30, 2018

Annual fundraiser at Centro Hispano encourages action, celebration in a time of crisis for Latinos
​​After an outcry from immigration advocates, faith leaders and politicians, President Donald Trump signed an executive order to stop separating children from their parents when they try to cross the southern border. For Latinos around the country, that crisis was one of many, said Karen Menendez Coller, executive director of Centro Hispano, pointing to the end of protected status for Salvadoran migrants, DACA recipients hanging in legal limbo and a constant barrage of rhetoric where families are being used as “pawns” in a battle for immigration legislation..
​   -The Cap Times, June 21,2018 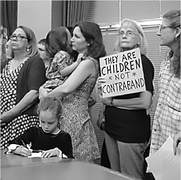 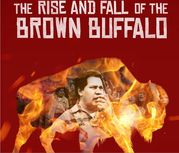 “The Rise And Fall Of The Brown Buffalo”
​Anyone who has read Hunter S. Thompson knows it is often difficult in his works to separate reality from fiction… or from drug-induced hallucination.  So, in Fear and Loathing in Las Vegas, when Thompson described his attorney as “a 300-pound Samoan,” we should all know to take that with a grain of salt. In fact, Thompson’s attorney was the Chicano civil-rights activist, novelist and lawyer Oscar Zeta Acosta, a force of nature, and a far-cry from Thompson’s bizarre caricature...
-WORT FM, June 18, 2018

​Immigration And Refugee Task Force Addresses Driving Without A License
​​A task force looking at issues that affect immigrants in Dane County is calling for a state driver's card to be made available to all residents, including those living in the state without legal documentation. "This will increase safety for all while adding the benefit of providing a revenue stream for the state of Wisconsin through required fees and insurance premiums," said Centro Hispano director Karen Menendez Coller.​..
-Wisconsin Public Radio, June 15, 2018

​Summer food program launches next week
​A number of public and nonprofit partners are joining together to improve the Summer Food Program, which starts next Monday, officials announced. The City of Madison, REAP Food Group, Madison Metropolitan School District, Public Health Madison & Dane County, Centro Hispano and other community partners are expanding the Summer Food Program, which provides free meals to all children 18 and under at 50 locations throughout the city...
-Channel 3000, June 14, 2018 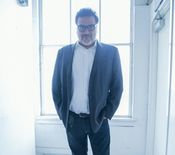 Centro Hispano to Welcome Award-Winning Documentary Filmmaker Phillip Rodriguez for 3rd Annual Evening of Dreaming – Acción
​Centro Hispano of Dane County has announced that it will be presenting an exclusive screening of the Rise and Fall of the Brown Buffalo, a film by Phillip Rodriguez, for its 3rd Annual Evening of Dreaming – Acción on June 22nd at 6 p.m. The event is presented in collaboration with Wisconsin Public Television.​..
-Madison 365, May 25,2018

15th Annual El Día de los Niños Celebration at Goodman Community Center Making Sure Parents and Children are Okay
​For the past 15 years, El Día de los Niños has almost been a rite of spring on the first Saturday of May. It is as if the children come out of their cubby holes and once again run and play outdoors and performing indoors as their parents learn about community resources...
-The Capital City Hues, April 30, 2018

​Centro Hispano Lays Out Future Plans at Strategic Update Breakfast
“When you talk to parents and when you ask them why they moved here, they will say the answer is pretty simple, ‘Por una vida mejor.’ For a better life … and better future,” said Centro Hispano Board of Directors President Mario Garcia Sierra. “...
-Madison 365, April 30, 2018

“We Want to Make Centro Stronger.” New Deputy Director Brings Years of Community Commitment
​Last September, Centro Hispano made an exciting announcement welcoming Evelyn Cruz to its staff as its new deputy director. Centro has been around for 35 years, and Cruz is now part of a team serving hundreds of families in the Madison area. Since its beginnings in 1983, Centro Hispano has provided a range of programs that support Dane County’s Latino population that focus on youth, families and the community...
-Madison 365, April 16, 2018

​The Dane County Immigration Affairs Initiative Dealing with Fear and Giving Hope
It was a natural thing to do when Dane County Executive Joe Parisi established the immigration affairs specialist position last October. Immigrants live across the Greater Madison area and Dane County. And many are impacted by Dane County Human Services while they become integrated into the fabric of the community and become self-sustaining members...
-The Capital City Hues, April 2, 2018

Lawyer, author encourage Madison Latinos to tell their stories, 'papers or no papers'
With President Donald Trump's comments about Mexican immigrants, increased fear of immigration enforcement and the uncertain status of the DACA program, undocumented people are keeping low profiles. But at Centro Hispano on Sunday, Cesar Vargas, an immigrant rights activist who was brought to the country illegally as a child, told members of Madison's Latino community not to hide from, but capitalize on their past...
-The Cap Times, March 19, 2018

​'It's a shameful day': On original DACA expiration date, Madison advocates anxious for action
March 5 was the original expiration date for the Deferred Action for Childhood Arrivals program, which offers legal protection for immigrants who were brought to the country illegally as children. The policy, established by President Barack Obama's administration in 2012, didn’t actually end on Monday, due to a legal challenge working its way through the court system...
-The Cap Times, March 5, 2018