Our mission and vision

​DANE COUNTY WILL BE A COMMUNITY WHERE LATINO FAMILIES CAN ASPIRE UPWARD, TO REACH THEIR PERSONAL GOALS AND DREAMS BECAUSE THEY FEEL ENGAGED AND STRENGTHENED WITH THE TOOLS FOR SUCCESS. ​

​FOSTER connection.
We are a welcoming community, and we take great care to ensure support and belonging for all.
​ACT with mutual respect and dignity.
We embrace our diverse cultural assets, which collectively make us stronger.
NOURISH community.
We work together to create and advance opportunity for all.
LIVE with courage.
We will question our own assumptions protect and defend our rights and the rights of others, lead in collaborative ways, and seek help and guidance when we need it.
DEMONSTRATE  integrity.
We make time to clarify our collective principles, do the work it takes to live ethically, and establish systems to hold ourselves and each other accountable.

Our mission at work 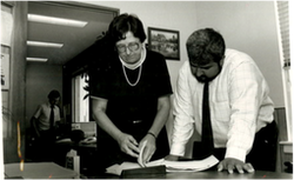 ​Centro Hispano of Dane County (Centro) was founded in 1983 by Ilda Thomas and other members of the community to provide assistance to Cuban refugees settling in the Dane County area.  These refugees known as the “Marielitos” had been relocated to the area with virtually no support for their transition and adjustment to a new country.  Earlier attempts to create a “Latino” organization in the community had met with resistance and difficulties.  OHA (Organization of Hispanic Americans) was founded in 1975 by Ricardo Gonzalez, Daniel Gaitan, Betty Barrientos and others.  The Latinx leaders in the community were not discouraged in their pursuit and continued to find ways to create a Latinx organization.  Their vision of an organization to serve the Latinx community was made possible from an initial grant from the United Way of Dane County.  These early years of the organization can be characterized by the personal commitment and passion of those key leaders.  Board members gave of their personal time and money to answer telephones, pay the rent and assist clients.

Each Director and Board has put their personal mark on the organization.  Ilda Thomas, as a former missionary and a deeply religious woman, is noted and remembered for the deep spirituality that she brought to the organization.  The programs sponsored by Centro Hispano evolved over time depending on the ever changing needs of the community, the funding sources and trends, and the leadership of the Board ad staff.  The creation of the youth programs for Latinx students can be credited to the influence of community leaders such as Betty Franklin-Hammonds who shared the model of Urban League’s youth program known as JAMAA with Ilda Thomas.

Under the leadership of Dora Zuñiga during the years from 1990 to 1997, the organization expanded its programs and budget.  Ms. Zuñiga added employment and housing programs, expanded the youth programs, as well as began collaborations with the HIV/AIDS Education Program, the Mental Health Center of Dane County, and the Madison Metropolitan School District.  The organization grew and gained visibility with events such as the Annual Banquet, Fiesta Hispana, and Breakfast with the Three Kings.

The third director, Juan Alvarez, believed that Centro Hispano needed to increase its advocacy role for the Latinx community here in Madison.  His professional background and experience in the Equal Opportunities Commission greatly influenced his vision for the organization.  In his tenure at Centro Hispano, the advocacy role was demonstrated with his involvement on Mayor Sue Bauman’s Task Force on Race Relations.  In addition, Mr. Alvarez attempted to increase funding for Centro Hispano by diversifying the funding base of the organization in continuing to expand programming.

​In January 1999, Lucia Nuñez became Executive Director.   Under her leadership, the efforts of the staff and Board of Directors, Centro opens a building at 835 W. Badger Rd. and relocates there 2002.  Lucia Nuñez was chosen by the Governor’s office to assist in his administration, Leaving Centro Hispano in January 2003.  Henry Amaya is appointed to serve as the Interim Executive Director.

​The Census reports in 2003 that Latinx have become the largest minority in the United States.  In July 2003, Luis Gomez becomes Executive Director.  Luis Gomez worked prior as a Youth Program Coordinator conducting academic support programming. 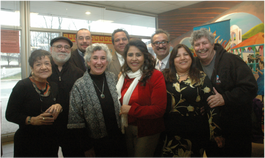 lIn 2001-2002 Luis Gomez develop the New Routes program.  Modeling this program, Luis Gomez and Henry Amaya developed and received funding for the: New Routes for Adolescents Program.  After a short tenure, Executive Director Luis Gomez leaves the agency in January of 2004.  The agency is once again left under the direction of Henry Amaya, who leads the agency successfully through two important transitions.

In July 2004, the Board of Directors appointed Peter Muñoz as the new Executive Director. Munoz served until he retired in 2010 and led the organization through a period of expansion including the purchase of their new facility on Badger Road in 2006. The agency now served over 2000 clients a year, with a staff of 15 and a $500,000.00 budget.  The agency continued to expand programming and to explore opportunities for growth.

Centro hired Dr. Karen Menendez Coller to run the organization starting in 2013. Under Coller’s leadership Centro has experienced tremendous growth. Coller and her team have focused on strengthening families by expanding adult programs to offer career tracks in healthcare, and then in finance and  by increased community engagement through wellness activities. Community programs and events have flourished – Centro launched its summer Mercadito in 2016 and saw six women progress through a leadership program, to become Community Health Workers and setup their own co-op in 2019. Coller is also an advocate for the community and serves on many boards and committees in the city – she was the recipient of the inaugural Nan Cheney March for Justice Award in 2017.

Coller understood the need to strengthen the capacity and sustainability of the organization  and hired the agency’s first Development Director Nina Gehan in 2016. Effort was immediately put into diversifying the agency’s revenue streams – long time tenants moved out the building as the agency grew.

From 2016-2020 focus was put on strengthening the organization, including securing a complete remodel of the agency valued at $800,000 in 2016, expansion of Centro’s high school programs for the first time to a new site at La Follette High School in 2018, establishing an Agency Partnership Program in 2017 with businesses and organizations, launching the first bilingual AODA support group in the state, and securing a Wisconsin Partnership Program grant which brought 1m to the agency to work on mental health over five years. The Centro Becas Program was established in 2017, formalizing a scholarship program that has been in existence for over 10 years. The Becas Program awarded a record $45,000 in scholarships to students in 2019.

​​In 2018 the team worked together to develop Centro’s Core Values. The agency now has over 20 full time staff members and an annual budget of 2.5 million.
Thank you to our 2022 Agency Partners! by Development